On the '04, the Medallion Display is located near the left knee, and behind the steering column. You would have to nearly stand on your head to read it, and the original display was hard to read at the best of times. Replacing the display with a newer version and moving it to the headlight switch position is a huge improvement. You can easily view the screen and make selections even while you are driving. The screen that I choose as the default is the Speed in Kilometres (Unless I am State side), the RPM, and the gear actually engaged. The headlight switch is in the former display location and closer to the left hand. Now the display is actually useful and you will be surprised how much useful information is available, while you are driving.

The first step was to remove the display, by removing two phillips screws from the back, a few from the front and pulling the wire harness. Then to remove the headlight switch you have to remove the gauge cluster by removing the 6 phillips head screws in front, and all the screws along the top edge of the dash cover. With the cluster area open there are four lag bolts on the inside that hold the cover onto the dash. With them removed and the cover removed you have full and easy access to the headlight switch. I removed the switch, and the harness. The harness easy reaches the former display area. I fashioned a plastic cover because the display area is a bit larger. I just used large screws through the front of the plastic cover into holes on the centre of each side of the switch and it holds nicely in place.

For installing the display I had to enlarge the hole in the dash, further to the right with a dremel. Be careful because you certainly don't want the hole too large. Measure twice, cut once is a good rule. I carefully drilled 4 holes, two for the two rear screws, and two to hold the front. With the display in place, I checked to make sure it works properly. Replace the dash cover and the four lag bolts, and the top edge screws, and the guage cluster, and you are back in action.

Medallion Instruments, a division of Borg Warner, direct or through Freightliner, have the new display unit available. I bought mine at the Freightliner booth, at the Minot FMCA, for $75 US. It has large, LCD characters, and a white background, and the light intensity varies with the dash light dimmer. Changing the display alone, is a huge improvement, even if you leave it in the original location. The new location is better yet. I am very pleased with how it looks and more importantly having access to such important information while driving. 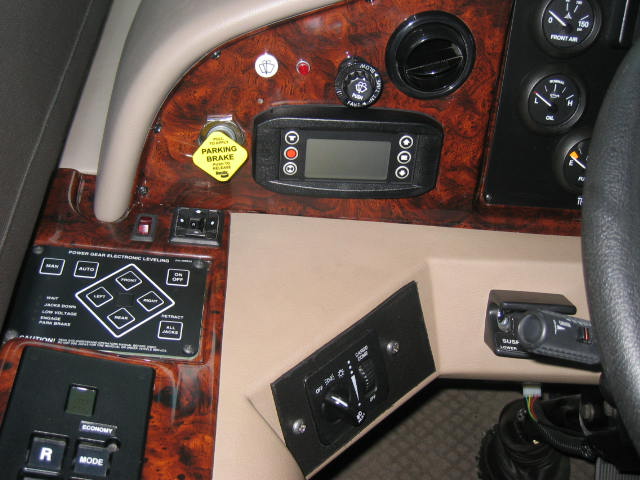